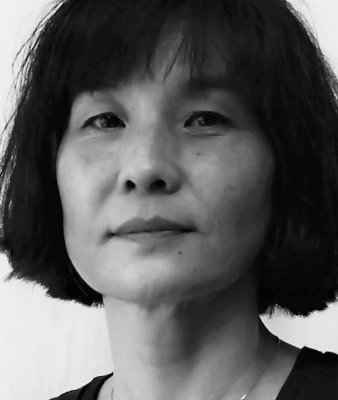 Born in Korea and adopted at age five by a family in Minnesota, Lee Andre’s early penchant for drawing led to art school and a BFA from the University of Washington. After a decade working as a muralist, she put her career on hold to travel and live abroad in such places as Korea, Thailand, and the UAE. By 2016, with the realization of time passing and the yen to return to her art, Lee settled in Florida and reestablished her studio practice.

Her vision for and choice in subject matter evolved, in part, after she stumbled upon a collection of old photographs of anonymous people and animals set in static poses. The pictures, taken when camera shutter speeds were too slow to capture movement, presented, without drama, an uncomplicated, mundane, and slower world view. Taking this sensibility back to her studio, Lee made the choice to limit herself to black and white using the rudimentary medium of charcoal. As an exploration of the notion of “yesteryear”, her work is, in essence, a reaction to the modern necessity of speed, newness, and disposable ease. Animals, then, became the natural subject for her work as they themselves are caught in the crux of human modernity.

Depicted in unremarkable stances and set within ambiguous space, Lee’s subjects often look out at the viewer as though posing for a photograph, a decidedly curious disposition that draws in the viewer through the subject’s natural charm and subtle gradations of light into shadow. But, for all her study of these animals and a desire for plausible accuracy, Lee is not your usual wildlife artist; it would be a mistake to narrow the description of her work to a specific genre. Her work is about process, the back and forth between construction and destruction.

“My drawings are composed of thousands of accidents. I have to be willing to destroy portions that I may have labored on for days or weeks; there isn’t a linear path to completion.”

Physically demanding, Lee works on rigid panels and acquires unique textural surface variations that are an integral aesthetic. Through her process charcoal does more than sit on the surface’ it weaves itself into the substrate making these deceptively simple works an intensely time-consuming affair.

Through her work, Lee expresses a broad spectrum of emotions from contentment to neuroticism, lightness to introspection. Her subjects range from the beautiful to the ugly, massive to the tiny, with endangered animals holding a softer place in her heart.

“There is a realization that I might be drafting a moment in time, that the animal might not exist at some point, and all that remains are memories captured in pictures.”