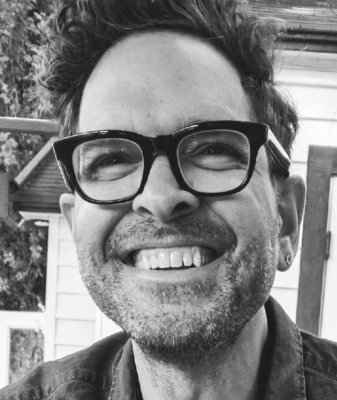 "I'm not so much a Western artist as an artist in the West. My ancestors walked, rode, ran their way here from the east coast and settled in California and Utah. I was born in California.

"My maternal grandfather was a California cowboy who worked on horseback as a guide in Yosemite. He raised five kids on a dairy farm before moving to Montana to strike gold, which worked out ok. He taught me to ride horses, (a perishable skill), write songs, and sing whenever I felt like it, also to shoot, and build things. I credit him with my having the imagination and the faith in life to make a good artist.

"My dad made his way west at seventeen from West Virginia. He never worked in the coal mines like his dad did for twenty years, but instead joined the Air Force. Stationed in Hawaii, he learned to surf and fight. It's his stubbornness I inherited that made me want to stick to painting no matter what. And I'm grateful for that. I'll credit my mother with what talent I have. She's proof talent is real. Her ability as a sculptor came easily and without much practice. She didn't do it professionally but could have had whatever she'd wanted if that had been her path. It's taken me lots of practice to paint well and I'm still practicing. My hope is that my paintings reflect and bring some joy, show energy and commitment, and cause that spark of surprise, delight, and happy reverence that I look for in art and life."